Amphetamine Reptile Records have just released a limited batch of the A Taste for Bitters colored splatter vinyl reissue in the USA, featuring brand new 4-color silkscreened artwork by the one and only Haze XXL! Available now on the Amphetamine Reptile online store. Check out the new artwork: 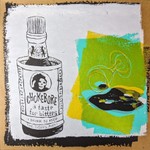 Over in Europe, the vinyl reissue was released on Friday in French and German record stores, with a limited batch of the color splatter version available in independent record stores. 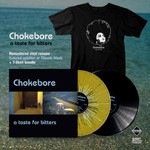 Chokebore's third album, the indie rock cult classic A Taste for Bitters, is getting reissued for the first time on vinyl! A pinnacle of dark and melodic rock, this amazing album has lost none of its urgency since its original release in 1996 on Amphetamine Reptile Records.

The MP3 download coupon includes two bonus tracks: the album's CD-only closer The Rest of Your Evening and the "full band winter version" of Days of Nothing.

A limited edition T-shirt is also available, either bundled with the vinyl or separately.

This beautiful vinyl reissue is due on Friday the 11th of December 2020, and is now available for pre-order on the Vicious Circle online store!

Due to the current health situation, the release of the A Taste for Bitters vinyl reissue has been pushed back to the 11th of December.