Here is the flyer for Chokebore's February 2010 tour:

The painting used was made by Jonathan Kroll. It is a play on El Greco's Mary Magdalene in Penitence. The "Chokebore" lettering was taken from the cover of the album A Taste for Bitters.

A message from Jonathan:

who: Jonathan Kroll
what: an exhibition of recent paintings
when: December 7th, 8-12 p.m. (NEXT MONDAY)
where: The Forgotten Bar, Boppstraße 5, 10967 Berlin

It would be lovely to see you there!
....Jon

P.S.: The exhibition will be up for one night only, so don't put it off!

A message from the band:

We are happy to announce that Chokebore are getting back together again to play a handful of shows around Europe!
We're gonna rock you like it's 1997!
More news very soon... 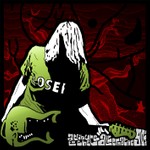 French band Run Ronie Run covered the Chokebore song Foreign Devils on the Silk Road on Memoria: A Tribute to the Alternative 90s, a compilation of indie bands covering classic 90s bands such as Nirvana, Rage Against The Machine, My Bloody Valentine or Soundgarden. Listen to the track on Run Ronie Run's Myspace page, then buy the record online from Yr Letter Records!

A message from Jonathan:

Jonathan Kroll + Jan Schieffer = Carrousel (a sort of band) and we will be playing our loosely formed brand of improvisational background music tomorrow October 29th at White Trash Fast Food in Berlin (Schönhauser Allee 6-7, U: Rosa-Luxemburg-Platz) at 9 p.m. Cover charge? 3€

A Newborn Riot of Dreams, Jonathan Kroll's slow and wordless musical project, can now be found on both Myspace and Facebook. Two tracks can be streamed on either page: The Far Bank and We Meet Between Glass. Both were recorded during A Newborn Riot of Dreams' first and only live performance, opening for Coco Rosie on November 26th 2005 at the Divan du Monde in Paris, France.

Photos of A Newborn Riot of Dreams' show at the Divan du Monde can be found on PhotosConcerts.com.

Jonathan Kroll now has an online art portfolio at www.jonathankroll.net. The site showcases his work and provides links to two past exhibitions at David Patton Los Angeles: "Dutch Treat" (16 February - 15 March 2008) and "a good chance at some point" (13 January - 10 February 2007).

The French band Exsonvaldes has just released its new single Lali. The digital download version (available on iTunes, or free if you pre-order a copy of the 10 inch color vinyl version) includes a cover of Chokebore's song You Are the Sunshine of My Life.