The Color of Noise is a full-length documentary on Haze XXL (a.k.a. Tom Hazelmyer) and his label Amphetamine Reptile Records, which was Chokebore's first record label. It features interviews and rare live footage of bands and artists that shaped the musical underground during the nineties, among which Boss Hog, Cows, Guzzard, Hammerhead, Melvins, Mudhoney, Today Is The Day, or Unsane. The movie was just released yesterday as a Blu-Ray+DVD combo, and is available online from MVD Entertainment or Amazon. Check out the trailer below:

Following up on the heels of the film, The Color of Noise's original soundtrack will be released this Friday, November 27, as a Record Store Day Exclusive release for Black Friday 2015! This limited edition double LP (one clear blue and one clear red 150 gram vinyl) features classic cuts from Unsane, Helmet, Mudhoney, Cows, Melvins, along with Chokebore's 60,000 Lbs from the 1993 album Motionless, all following the track order of the film. Get yours at your local independent record store! 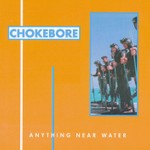 Anything Near Water on Bandcamp

Chokebore's second album Anything Near Water turned twenty in March this year. Today, the band is releasing it as a digital download on the new Chokebore Bandcamp page! And if you prefer the real thing, the vinyl reissue is still available from the Vicious Circle online shop.

Troy and Jon on Anything Near Water

To mark the occasion, we've asked singer/songwriter Troy Von Balthazar and guitarist Jonathan Kroll to look back on the album and the times when these songs were written, recorded, and performed.

"Those years were all really a blur of endless touring. It was great. We were getting better musically and trying new things." — Troy

"We just had a bit more breathing room, a bit more space for experimentation and play." — Jonathan

While you're reading the interview, listen to Pink Deluxe, an outtake from the album's recording sessions that was released as the B-side of the Thin as Clouds 7-inch single.

And to read more on the subject of Anything Near Water, check out these two great articles from the site's archive:

To be released on March 31, the book "I Found My Friends: the Oral History of Nirvana" tells the story of Nirvana through the memories and experiences of 210 musicians from 170 of the bands who performed with the iconic Seattle band between 1987 and 1994. According to the author, Nick Soulsby, Troy Von Balthazar is one of the book's major contributors: "Troy was one of the first people I was in touch with about his experiences on tour with Nirvana. Frankly, he was so supportive it was a massive encouragement and helped keep my morale up and keep me going through all the months of grinding work involved. I think I owe him big time for his decency and friendliness."

Describing Troy's contribution, Soulsby writes: "Troy became the most central voice in chapter 19: 'Creaking: the In Utero Tour - October 1993–January 1994.' His reminiscences cover the last nine gigs Nirvana would perform in the U.S., Chokebore having joined Nirvana from December 29, 1993 through to January 8, 1994. Troy made clear that it was Krist Novoselic's personal support that led to Chokebore being invited to join the In Utero tour. Kurt Cobain's own kindness to Chokebore earlier in 1993 is recalled alongside what were actually a lot of happy memories of the touring experience."

Nick Soulsby plans to work with Troy later in the year to write a short article specifically on Chokebore and Troy's work for his blog Nirvana Legacy using the leftover material and further research. Meanwhile, check out Soulsby's post about the book on his blog!