Hello everybody,
Thank you for coming to the Chokebore shows. We hope you had a great time at the concerts, we sure did! It was a really fun tour for us with lots of good music and friends.
Maybe we will see you again.
Love,
Chokebore

The live photos section has been updated with 9 new galleries of pictures taken at this autumn's shows:

The flyers & posters gallery has also been updated with some flyers and posters from the tour. If you'd like to add one to the gallery, once again: please contact the webmaster!

Here is a little collection of links about Chokebore's autumn 2011 tour:

A Newborn Riot of Dreams to release first LP in 2012

In January 2012, A Newborn Riot of Dreams (the musical project of Chokebore guitarist Jonathan Kroll) will release The Preservation of Links, its first 12-inch vinyl LP, on Czech label Lokal Rekorc.

The new Chokebore 5-track EP Falls Best has just been released as a digital download on Bandcamp and iTunes!

The record can also be fully streamed from Bandcamp:

And of course, the 12-inch vinyl version (including free MP3 download) is still available on Vicious Circle's online store!

We are sorry to announce that our concert in Hérouville-Saint-Clair on November 1 has been cancelled. On the other hand, a new show has been added: Chokebore will be playing a FREE show at the Astrolabe in Orléans (France) on Sunday, November 6, at 7 p.m. See tour dates page for the complete tour schedule. 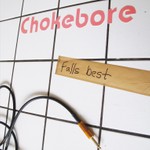 Ladies and gentlemen, it is my pleasure to announce that Chokebore's new 12-inch vinyl EP Falls Best is out today! It holds five new tracks and comes with an MP3 download code, all for 10 Euros.

If you are in France or close by, you can pick it up at a record store near you. Otherwise, you can buy Falls Best online. The record will also be on sale at the concerts, starting next week in Germany!

If you'd like to know what it sounds like, you can read the first reviews on Mowno and on BUB (both are in French), or just listen to the first track titled "Lawsuit" right here:

The other tracks can be previewed on the Falls Best order page.

To help you sing along at the shows, the lyrics to all five new songs of the record are available on the Falls Best lyrics page!

Happy listening and see you at the concerts!

And if you are outside of France, you can still pre-order Falls Best through Vicious Circle.

Two-minute previews of every track are available on the Falls Best pre-order page. You can listen to Lawsuit, the first track off the new EP, on the new Chokebore sounds page.

Chokebore's new EP Falls Best will be released on 12-inch vinyl on October 10 by the French label Vicious Circle. It will also be released in digital format after the band's autumn tour.

Pictures of the master disc

Here are some pictures of the master disc being cut at the studio and being played for the first time: 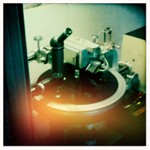 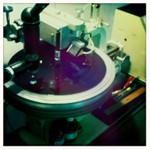 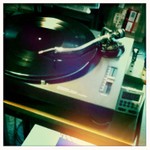 The rest of the German tour dates are here: before Berlin in November, Chokebore will play in Nuremberg, Trier and Weinheim in October. See the full European tour schedule on the tour dates page.

Here is the poster for Chokebore's autumn 2011 European tour:

It was designed by Jonathan Kroll using one of his paintings.

Chokebore's new 5-track EP has just been mastered yesterday in Berlin! The five new songs have been recorded in Berlin and in the South of France, and should be released on vinyl during the band's European tour this autumn!

A couple of pictures from the mastering session: 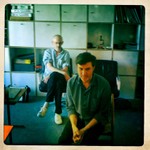 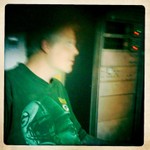 Chokebore will play in Berlin on November 15 at Marie-Antoinette. The venue does not do pre-sales, but tickets can be reserved by emailing the booking agency Puschen: please send your full name and number of tickets (10 Euros each) to chokebore@puschen.net.

All concert dates for France, Belgium and Switzerland are now confirmed! Head to the tour dates page for the updated listing. German shows are being booked and should soon be added to the schedule…

Chokebore went in the studio last Monday to record two new songs for the upcoming Chokebore vinyl. Add in the three songs that were recorded last year, and that's a total of five new songs to be released in the autumn!

Here are some lo-fi snapshots from the recording session:

The new Chokebore promo photo for 2011 was added to the press photos gallery. Download the high-resolution image (3.19 Mb).

"Some Pears" by Jonathan Kroll

The small French publishing house Ialou has recently released a book of paintings by Jonathan Kroll (Chokebore guitar player). The book, titled "Some Pears", contains pictures of originals in oil on linen, in 1:1 scale, with an accompanying text by the artist. The book is now available in Paris at the Yvon Lambert art gallery and the 0fr bookshop, and later on in other locations. .

Special vinyl discs holding the first new Chokebore songs in recent years should be on sale at this autumn's shows!

Currently embarked on a European tour, Troy Von Balthazar will be playing at La Machine du Moulin Rouge in Paris next Friday. The opening act for this particular show is none other than A Newborn Riot of Dreams, the musical project of Jonathan Kroll (Chokebore guitarist). And since Chokebore drummer Christian Omar Madrigal Izzo is playing drums with Troy Von Balthazar, that's 3/4 of Chokebore in the same night! See you there!

The opening night will take place in the presence of Troy Von Balthazar on Thursday March 31st, starting at 6 p.m. You're all invited!

who: A Newborn Riot of Dreams
what: instrumental music
when: 13 January 2011 (next Thursday)
where: KIM / Brunnenstraße 10 / 10119 Berlin
why: because it's nice to listen to music and spend time with friends
how: .... this one is still a mystery