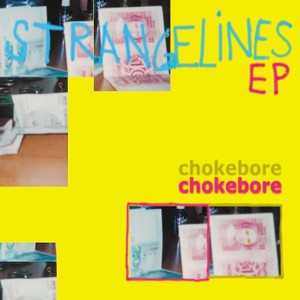 Strange Lines is an EP by Chokebore, released in February 2001 by micro-label Redwood Records on CD and limited-edition translucent 12-inch vinyl (1,000 copies). It was recorded by Troy B. Balthazar at Botboy Studios (the band's studio and rehearsal space) in Los Angeles, CA (USA), during the fall of 2000.

Strange Lines features two new songs, the second of which would be re-recorded on It's a Miracle, plus The Rest of Your Evening (Los Angeles), a new version of Black Black's final track with new lyrics and a long lead guitar improvisation. Redwood Records' owner Chris Smith wanted to release this song on vinyl because it was not available on the LP version of Black Black.

Strange Lines is Chokebore's first recording with drummer Christian Omar Madrigal Izzo since he rejoined the band in 1999.

The record's artwork was designed by Chokebore guitarist Jonathan Kroll. 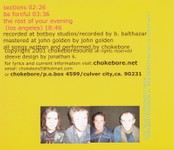 recorded at Botboy studios/recorded by B. Balthazar
mastered at John Golden by John Golden
all songs written and performed by Chokebore
copyright 2001 chokeboresound all rights reserved

For those people that have followed Chokebore throughout their existence, four full-length records and numerous singles and B-sides, know that they have taken the road less traveled and slowly progressed from writing the loud, fast, and highly dynamic type songs to a slower, sometimes quieter and more emotionally dense type of song. The Strange Lines EP falls into that typical Chokebore songwriting progression that we are familiar with. They have mastered the art of writing the "slow sad song." And this not a bad thing by any means; the guitar is less abrasive but more raw and torn, reminiscent of early Liz Phair guitar work. The drums, solid and slow, married to bass lines of the same description, serve as the backdrop for Troy's lyrical manifest of confusing emotions that can do nothing but be put to this music. Again Chokebore champions something unique, that no other group of people could pull off. And it's their surroundings; it's where they live and the friends that come and go that fuel this band and their lyrics. Los Angeles and women that have come and gone from their lives have defined Chokebore. This three-song EP is only the beginning of what will be their fifth full-length album… sure to be yet another masterpiece collection of "slow sad songs."