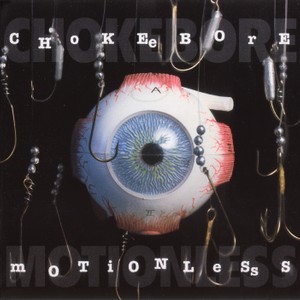 Motionless features the band's original drummer Johnee Kop, credited as "Rice Cube" or "Jungle Boy," depending on the release.

The album cover was designed by AmRep boss Tom Hazelmyer (aka Haze XXL), with the rest of the artwork using photos by Dan Corrigan.

Motionless did not produce any singles, but it did spawn a music video for the song Coat, which was featured on AmRep's Dope Guns and Destroying Your Video Deck #3 VHS compilation.

Fun fact: the track Hit Me is Chokebore's reinterpretation of Rod Stewart's classic 1978 hit Do Ya Think I'm Sexy?, though there is little left of the original but the verse lyrics!

Motionless was reissued twice on CD, first in 1998 by Boomba Rec to accompany the European release of Black Black, then in September 2002 by Pale Blue, this time with brand new artwork designed by Chokebore guitarist Jonathan Kroll. After staying out of print for several years, it was reissued on white vinyl in October 2013 by Vicious Circle to celebrate the band's 20th anniversary, once again with new artwork. 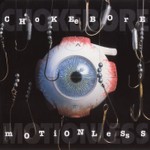 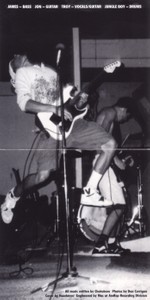 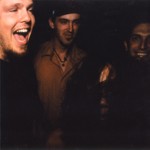 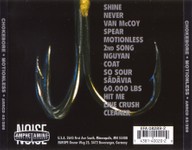 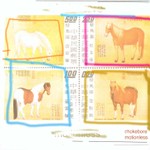 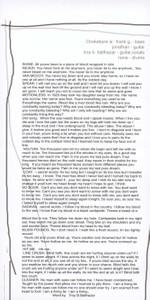 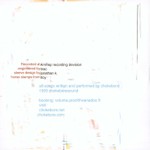 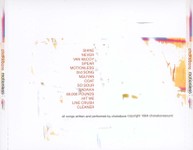 Chokebore materialized out of nowhere (or so it seemed) when Amphetamine Reptile released the band's first single this spring. Like every other artist that signs on with the label, the L.A. group's music style was quickly pigeonholed by reviewers and consumers who noticed the AmRep logo on the 7″ picture disc. The sound of Chokebore, however, is far from that of its labelmates, not the unrelenting guitar-punk "noise" that the label's known for. The majority of songs on Motionless include tense, bass-driven hooks, unpredictable guitar paces, and a broad range of yowls from vocalist Troy Miller. Just when it seems as though Coat could be a Pixies song, the band shatters that aura with a cluster of uncharacteristic strums, and Hit Me begins as if it were a Rod Stewart cover, but then springs upon us a screaming refrain of the song's title. Cleaner starts subtly, with light guitars and low vocals, packing a noisy punch at the end. The soulful agony that typifies the record is demonstrated best on So Sour, a sloth-tempo song of vehemence. No bore: Never, Motionless, Sãdãvia, and 60,000 Lbs.