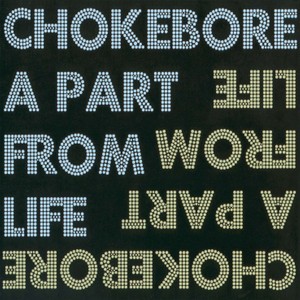 A Part from Life is Chokebore's only live album, released in Europe on September 9th, 2003, through French label Pale Blue, on CD only. It was engineered by Jean-Louis Thauvin and recorded by French public radio station France Inter on August 12th, 2001, at the 11th edition of La Route du Rock festival in Saint-Malo (France).

Chokebore was one week into the recording of It's a Miracle at the time, so A Part from Life's tracklist predominantly consists of songs from that album. A few of these tracks are slightly different from their studio versions as they did not have their final lyrics yet. The most notable case is Tiny Boosters, which later became I'll Save You.

A Part from Life's tri-fold digipack sleeve was designed by Chokebore's own Jonathan Kroll, with behind-the-scenes photos by Moni Müller and Jonathan.

The CD includes a data track containing the previously unreleased video of the song Ciao L.A. (as featured on the studio album It's a Miracle).