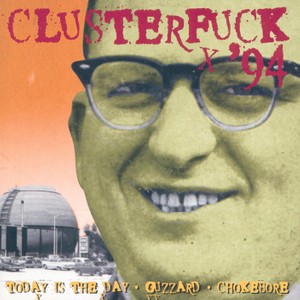 Clusterfuck '94 is a compilation album featuring labelmates Chokebore, Today Is The Day, and Guzzard, released in February 1994 by Amphetamine Reptile Records on 10-inch vinyl (black or translucent red) and CD. It was exclusively available at the merch table during the second leg of the eponymous Clusterfuck tour, which took the three bands (AmRep's newest recruits at the time) across Europe for five weeks in February and March 1994.

The compilation's artwork was designed by AmRep boss Tom Hazelmyer, aka Haze XXL.

mastered and edited by Mac

Here it is. AmRep's most recent recruits. Still wet behind the ears, and young enough to desire balls out kickin it. This comp is a varied taste of what each band has dumped on this jaded world to date. The tracks vary from cuts off debut singles, unreleased tracks, as well as a sample from each bands debut LP. To that handful of folks left out there that still enjoy climbing behind the wheel so wasted you can't remember your name, and slamming the accelerator, welcome to the club. The rest of you can remain cringing in the back seat. This comp exists to fund the second installment of the "Clusterfuck" tour. The first half took place in the U.S. with these 3 bands in 1993.

These boys hail from Hawaii, transplanted to L.A. a year or 2 ago. Definitely some mutant chemistry shaking here. From Troy Millers intensely strange vocals (this fucker actually has pipes & chops) to the "Too Tall" Kroll brothers bass and guitar combo. You ever read those stories about mutant twins who have their own language and communicate with no one else... Drummer Jonny Kopp a.k.a. Jungle Boy a.k.a. Rice Cube a.k.a. whatever strikes him that day, is a former skate god gone drummer. You know how most drummers are a little "touched", well this guys bucking for awards.

Today Is The Day

To be honest, a carpenter can count on one hand how many good bands have come from the south in the past few years, let alone a band as completely fucking out there as Today Is The Day. From Nashville Tennessee, I'd assume the overwhelming stifling mindset of the bible belt is what had these guys exploding in such a ballistic way. Steve Austin turns in industrial strength guitar and mindfuck lyrical content. Mike Herrell does bass action while Brad Elrod proves why drum machines are fucking hopeless.

From the frozen wastelands of Minneapolis comes Guzzard. The band is the brothers Beeman. Tom on guitar & vocals and smacking shit around is Pete. Bass chores are handled exclusively by David Paul. The songs are as tightly wound up hooks that can snag even the most jaded fuck. No, this is the modern world, shave yer head and yer ass will follow. You want it big and punchy, here you go. Enjoy.