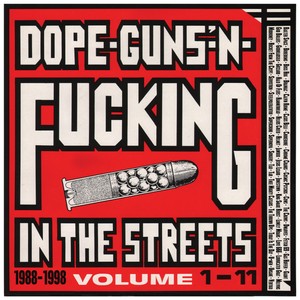 This release has the same catalog number (AmRep 105) as the War Pussy 10″ by The Melvins, released the following day by Amphetamine Reptile.

It all started on a half assed plan, a long since forgotten 'zine talked to me about doing a compilation single to come out with the next issue. The finances were vague to foggy at best, but my then 22 year-old ass was already off and running with the idea.

I was fresh back to Minneapolis after a four-year stint as a Marine, three of which were spent out in the Seattle area. The Seattle connection is pretty obvious on the first DGAFITS with 3 out of 4 bands being from there, and I had just put out singles with the U-Men and The Thrown Ups.

Steve Turner from The Thrown Ups asked if I wanted a track from his brand spanking new band he'd just fired up with fellow Thrown Up, Mark Arm. He sent a tape which I immediately jumped over as it sounded fucking aces. Results being that via DGAFITS, AmRep beat Sub Pop to the punch in releasing the first Mudhoney track!

I ordered the first batch of singles, the deadline on the 'zine was not forthcoming. When the test pressings came weeks later, the response was "Um, yeah not sure when the mag will be ready." Months later, the DGAFITS singles show up hot off the UPS truck from St. Louis and no 'zine in sight.

At that point we had about 2/3rds of the fledging label's assets tied up in this project so I said fuck it and called in a new acquaintance, Dave "Deuter" Johnson, to help on the cover. Once he was given the project's title and the one and only drawing of "Dopey the avenging reptile" (drawn at some point during my stint in the USMC as a never gotten tattoo), the only design guideline was "make it look like a Foetus record." Deuter did better than good, he did great. A screaming crypto-commie/fascist propaganda graphic sporting a twisted take on a radical White Panther Party slogan combined with a new and blistering take on punk/alt music. Perfection.

I stuffed the records in the trunk of my '68 Galaxy 500 while working my day job as a security guard in a downtown Mpls parking ramp. It all fell into place and what's not to love? Apparently, the indie music scene of the time felt the same and they sold out in no time flat.

It was the label's 12th release but quickly became one of Amphetamine Reptile's signature institutions. Some of the singles even charted on college radio charts! The LPs certainly did, which is nigh impossible for a compilation. It was a great way to introduce new bands on the label to the world. It was an even greater way to get to work with bands we loved that weren't on the label. Such as tracking down idols like Helios Creed of Chrome fame to do a DGAFITS track led to AmRep working with him full time. Some of those bands even stopped at the old headquarters and cut their track in our studio; Superchunk come to mind. The series even spouted a few bootleg knock-offs like "Crack Uzis n Safe Sex in the Streets Volume One." Followed by a spate of other labels trying to achieve the same success with their own 7″ compilations.

There's been a couple more DGAFITS released in conjunction with recent AmRep anniversary shows, and who knows, maybe Dopey plays phoenix and resurrects his tired ass. There's been more'n a few new bands that indeed spark the flames.